Sydney Mai site is one of the hottest new Japanese-American solo model sites launched in 2013.  You’ve probably never seen or heard of Sydney Mai before.  She’s new to the scene but her individual paysite has already been getting rave reviews.

It’s her wild personality that attracts the most attention, but her beautiful eyes and perky tits are just as enticing.  Her site is part of many included inside the PinkVelvetPass.com network.  So even though her site is still small, you end up getting access to a ton of bonus content including nearly a dozen other individual webcam model sites.

The first thing you’ll want to do is watch her website trailer.  It contains clips from her members-only videos and webcam shows.  There’s a genuine persona to this fun-loving babe.  She’s got a wild side too (check out the scene where she sticks her nude ass out of the car window while her friends drive down a public street).  The top menu links to separate photo and video pages.

Let’s start with the MY VIDEOS page.  There are 12 original scenes featuring Sydney Mai and a couple of her lucky friends.  One of her friends gets his dick sucked in POV while sipping on a beer.  Classy.  Another scene features a hot Asian chick on all fours as she fingers Sydney on her bed.  The content is filmed in various locations inside her home, as well as a couple of outdoor scenes.

Moving over to the MY PHOTOS page, you’ll find 12 picture sets to complement the videos.  These pictures feature professional photography of various nude and non-nude sets.  You can download them in zip folders.  As for the videos, there are many available formats including WMV, MPEG, and MP4, all of which have an HD option.  The site updates a new video and picture at least once a week and sometimes more. 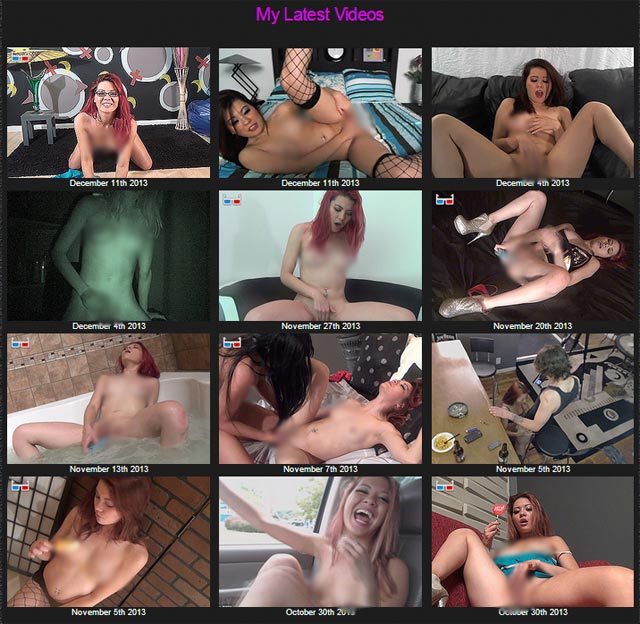 At only a dozen videos and picture sets, it’s hard to justify signing up to the site.  But when you factor in the network of bonus sites, it’s actually a much better deal than it seems.  Pink Velvet Pass can only be described as a mega-site.

There are literally thousands of videos throughout the site including many other individual webcam performers.  I’m not going to lie, the video quality is awesome and all pre-recorded cam shows are easy to download.

You’ve probably never heard of Kendra Rain, Lynn Pops, Brittany Avalon before, but if you enjoy high-end classy cam models, you’ll want to check them out.  All the individual sites, including Sydney Mai’s, are listed at PinkVelvetPass.com.  So go ahead and have a look at them.

Sydney Mai is a hot up-and-cummer who will have your cock throbbing with excitement.  It’s hard for me to recommend her site as it stands now simply because there’s not enough content.  Luckily, the bonus sites offer a ton of additional exclusive videos and private webcam shows.

Recommended Reviews For You

Submit Your Own Review Cancel reply